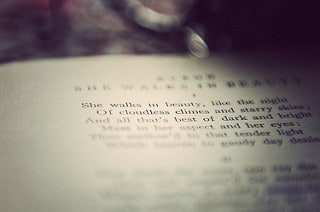 In today’s NEC Blog, English tutor Kathryn writes about poetry as part of our celebrations for National Poetry Day 2016.

‘What’s the point in poetry?’ I hear my students groan as I hand out this year’s GCSE poetry anthology. Yet by the end of the course students most often cite poetry as being their favourite literary genre.

Perhaps this is because, in the words of the American Beat poet Lawrence Ferlinghetti, ‘Poetry is eternal graffiti written in the heart of everybody’. Or maybe it’s simply because poems are relatively short, making it easier to squeeze them into our busy lives (which is why Poems on the Underground has been so successful since its launch in 1986). One thing for certain is that by making words sing from the page, poetry illuminates the world with a startling intensity that helps us see beneath the surface of things often in a matter of moments.

As this year’s theme for National Poetry Day is ‘messages‘, we thought it would be fitting to invite you to tweet your own poem or a favourite quotation from a poem in 140 characters or fewer to staff and students at NEC. You can interpret the theme in any way you wish.

If you would like to write your own poem, here are some ideas to get you started:

Here’s an example of a poem in free verse written with my young nieces early one morning as we waited for everybody else to wake up in our holiday apartment:

With the crunch of cornflakes/the wink of the sun/and the grumpy, slumpy slippers of the grown ups/the day tells us it’s morning. (132 characters)

And here’s an example of a haiku that took shape as I doused calamine lotion on my children’s chicken pox:

You can compose poetry on a bus, in the bath or in a dentist’s waiting room, so join in the celebration on National Poetry Day 2016 and get tweeting!

Here are some more contributions from NEC staff:

“‘Do not go gentle into that good night/Rage, rage against the dying of the light‘ (Dylan Thomas). I love Thomas’s passionate plea to approach the final stage of life with gusto and tenacity. It brings to mind WW2 veteran Bernard Jordan who made the news last year when he escaped from his nursing home and made his way to France to attend the 70th anniversary commemorations of the D-day landings. As an English teacher I also get rather excited about the masterful way in which Thomas moulds language into a villanelle – one of the most complex poetic forms.”
— Kathryn, English tutor

“Rudyard Kipling’s ‘My Boy Jack’, spoken by David Haig (Kipling) as an aside at the close of the Daniel Radcliffe (Jack Kipling) movie. A tearjerker of course. Weepiest moment since Funeral ‘Blues (Stop All the Clocks)’ in Four Weddings.”
— Daniel, Senior Course Adviser

“I have a weakness for slam poetry and spoken word. My favourite is probably either ‘Shrinking Women’ by Lily Myers or ‘Pretty’ by Katie Makkai. It was those or Shakespeare’s ‘Sonnet 27’ if we’re doing classic poetry, but if I went with Shakespeare I felt I would be too much a cliche of myself. I have a lot of favourite poems. It was impossible to narrow down to just one.”
— Simone, Course Adviser

“‘Lo, thus by day my limbs, by night my mind
For thee, and for myself, no quiet find.’
“This poem always makes me smile: Mrs Darwin, 7 April 1852. ‘Went to the Zoo’. ‘I said to Him – Something about that Chimpanzee over there reminds me of you’. – Carol Ann Duffy
“It’s from a collection I recommend called ‘The World’s Wife’, in which Duffy writes from the perspective of the women in the lives of famous male figures from history, mythology and fiction.”
— Helen, Editor

“I love ‘The Glory of the Garden’ by Rudyard Kipling. I first read it when I was in a book group with close friends. It was featured in the book ‘The Nation’s 100 Favourite Poems’ which we had chosen as that month’s read. The reading of this poem happened to occur just before my grandmother passed away. My grandparents’ garden was full of ‘tool- and potting-sheds’, ‘cold-frames and … hot-houses’. I remember ‘grubbing weeds from gravel-paths with broken dinner-knives’. This poem was such a wonderful revival of special memories for me. It could have been written about their garden. I read the poem at my grandmother’s funeral, and copied it out for several family members afterwards. I read it again for my grandfather’s funeral just six months later. Whenever I read the poem I think of my grandparents with joy, not sadness. I remember happy holidays playing in their garden, enjoying the fruits of the not inconsiderable labour. It was a glorious garden, and will always be in my mind’s eye. This poem, so beautifully written, I am sure will invoke similar memories for many others. This is the power of a great poem, perhaps moving us to tears of joy or sadness, so often awakening memories so vividly.”
— Stephanie, Senior Course Co-ordinator

“‘The naming of cats’ from ‘Old possums book of practical cats’ by TS Elliott. Also the inspiration for the hit musical ‘Cats’. I love the poem because the idea of a cat needing three different names, one of which no human could ever know, really appealed to me as a kid. Growing up as and surrounded by cat lovers I just find this intriguing! ‘You may think at first I’m as mad as a hatter when I tell you a cat, must have three different names.’”
— Carly, Sales and Marketing Manager

If you would like to find out more information about National Poetry Day and to read more examples of longer poems about the theme of ‘messages‘ visit NationalPoetryDay.co.uk.

If you’re an aspiring writer, or already enjoy putting pen to paper in some capacity but want to brush up on your skills, our writing courses will teach you all about the techniques professional writers use and enable you to produce polished and well-structured pieces of writing.