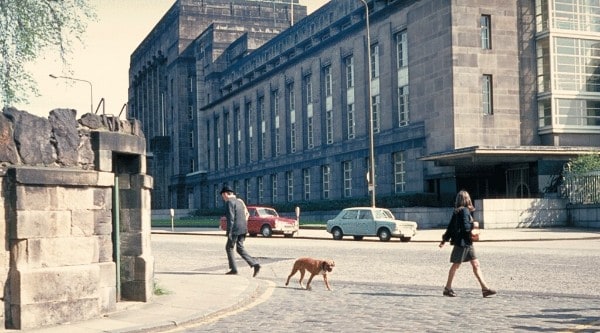 Today’s guest blog is written by Chris Holligan, Professor of Education at The University of The West of Scotland. Chris details how his life dramatically changed after discovering the National Extension College in the early 1970s.

I left school in 1968 with no qualifications bar the incomprehensible Edinburgh Leaving Certificates. I think they were ‘donated’ by the School – a junior secondary for boys – to prove we had been there and that the teachers had given their input over the 3 years we attended. I doubt I learnt much except that the Headmaster enjoyed checking our shoes were shining black.

My parents decided I had to “learn a trade”, so I attended a series of apprenticeships. On one, the mechanics – who were having fun – nailed my tool box to the garage work bench. I wondered why it had become heavier since I put it down. I left not long after.

I found work as an apprentice ski teacher in the Cairngorms. I had become good at it and the instructors in Edinburgh found me a place to work in Aviemore. Most of the time I polished what were very large leather ski boots after they had dried out. Some days I went “on the hill” to learn to ski better and eventually I passed my BASI Ski Instructor exam at aged 17. I was now qualified to work in the mountains and taught in the Alps for some time. Everything was going well until during a practice run for an international ski race in Val D ’Isere, I fell and was carted off with a double leg fracture. That accident in January 1971 was to change the direction of my life.

Once home I had nothing to do. I could hardly move and was feeling down. I received £60 in compensation for my injury, and with that I took O-Level English Language at a Tutorial College in Edinburgh. I had been impressed by many of the very educated people I’d met in the Alps. They read books and spoke about university. It made me feel slightly ashamed of my own background. My parents had left school at 14. Nobody except my sister read at home. I’d failed the 11+ and not got into the type of academic school she attended.

Not long after taking classes at the tutorial college I found out about the National Extension College. I was living in shared accommodation and some of my housemates were attending Edinburgh University. They seemed happy and confident. I don’t remember who told me about NEC, but the courses were about £35 for an A Level – this was in 1972-73. I chose A level Sociology as the subject intrigued me – A Science of Society. The course was a defining moment for me. It altered how I saw my background and myself. It released me from what seemed at the time a mental and emotional prison. The units were fantastic and I had a tutor who was interested in helping me learn. I loved receiving the feedback on my work and working through the very engaging units. Months later I also enrolled on A level Economics with NEC. It inspired me to understand how money and systems worked. I learnt to appreciate the meaning of the Law of Marginal Utility and the ideas of Adam Smith. I took out a weekly subscription at the local newsagent for the Financial Times. It was amazing having it delivered through the house letter box. Taking these two A levels made me think I could take A level History too.

Having passed all my A levels. I applied first to Cambridge, having liked the people I met skiing and visiting the colleges I decided that was where to go. I had no idea about its reputation or standards. In the General Paper that I took at St. John’s College, one question was:

“If the cosmic telephone rings should mankind answer?”

Although one tutor supported me for a place at Pembroke College I felt the Master took a different view. Once I got over the long and kind rejection from Cambridge I went north to York, away from my friends. It was very enjoyable. I took Philosophy and English. After graduating I went to Edinburgh University for one year to train as a teacher. After passing my two year probation in a school I won an SSRC award to take a Masters at Aberdeen. I gained a First and then a place at Cambridge to take a PhD. That was impossible to take up as we had no money to pay for it. The MRC and St. Andrews University offered me a post-graduate advanced scholarship that even included money for our 3 children and covered everything, fees, and board. It was after graduating in 1987 that I began my academic career. Over the past thirty years my career has seen me lecture in Beijing, Hong Kong and Jordan, publish around 60 academic journal papers and become a Professor at the University of the West of Scotland. With colleagues I’ve received several large collaborative research grants, and a career highlight, an invitation to speak at Yale.

Without my Sociology A Level at NEC I doubt any of this would have happened. Taking that A level was the most inspiring and rewarding intellectual experience in my entire personal and professional life. It was a turning point. I did not know at the time what it would lead to. I learnt to love learning and ideas, even though it was only my tutor and I that took part in the experience.

If you’re inspired by Chris’ story, why not browse our range of online distance learning courses?