Alan Tuckett has reasons to be cheerful for adult education Monday, 17 June 2019 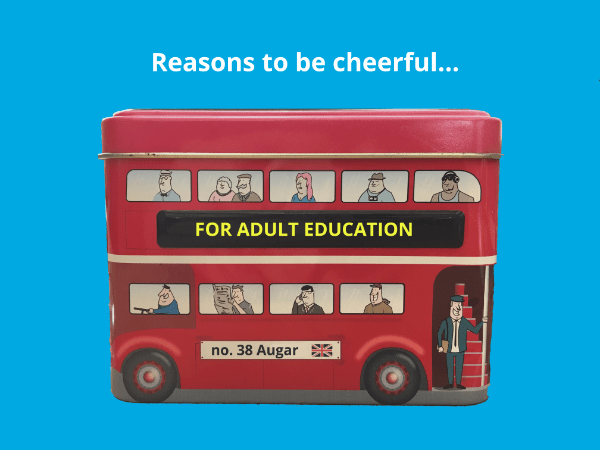 After a decade of decline and policy neglect, this is suddenly the season of reviews affecting adult learners. Like number 38 buses, you wait for ages, and all of a sudden a rash of them appears at once. The independent review convened by Vince Cable has published an early report calling for a personal learning account – focused primarily on vocational courses. The Labour Party has a commission looking at further education, looking for practical recommendations to set alongside the Party’s promise to end tuition fees for undergraduate higher education. The Civic University Commission called for a revitalised focus on the civic responsibility of universities, for the wider education of civil society. The Centenary Commission on Adult Education, on which I am vice-chair, is inspired by the great report of the Ministry of Reconstruction’s Adult Education Committee, a hundred years ago, which argued (in capital letters in the original for emphasis!) that ‘ADULT EDUCATION IS A PERMANENT NATIONAL NECESSITY, AN INSEPARABLE ASPECT OF CITIZENSHIP, AND THEREFORE SHOULD BE UNIVERSAL AND LIFELONG’.

However, whilst we may hope to see creative contributions to policy thinking arising from each of the foregoing, the Augar report, which has finally been published, makes a powerful case for the attention of decision makers of all sorts.  It is the first report that has paid serious attention to the overall shape of further and higher education, and makes a powerful case for a significant increase in investment in further education. It calls for the Government to re-instate the right to the building blocks of an educated workforce – a full first level 2 and to a first full level 3 qualification (broadly the equivalent of A levels).  It then makes key recommendations that, taken together and if accepted, will lead to a more adult friendly further and higher education system:

‘The government should introduce a single lifelong learning allowance for tuition loans at Levels 4, 5 and 6, available for adults for adults aged 18 or over, without a publicly funded degree.’

Augar argues that this should be set at a rate equivalent to four years of loans at current HE, that it should be able to be taken in bite sized chunks over time, and that higher education should accommodate this by modularising courses, with each attracting credit, and developing intermediate Certificates at level 4 and Diplomas at Level 5.  The result would be a much more adult friendly system.  Along the way he recommends an end to the ‘ELQ’ rule, where since 2008 no public support could be offered to anyone seeking to study at the same or a lower level of qualification than their highest current level of qualification.  At a stroke this would make re-skilling for changing economic circumstances more viable.  On the plus side, too, the review endorses the aspirations of the National Retraining Scheme for an effective Careers Advice service.

So far, so very good. And yet. There is precious little in the report on the wider civic responsibility of post-school education. True, there is a little box in the higher education chapter that reviews the civic mission of higher education, and a short section, again in higher education, that looks at widening participation and outreach. In FE, it says that there is little or no evidence of the work of community education. It has, perhaps as a result, nothing to say about the challenge of motivating and engaging adults to participate, nor on the importance of outreach work, or of opportunities to put your toe in the water on a return to learning. Its singular focus on the economic benefits of investment in further and higher education do not stretch to evaluating the social (and for that matter economic benefits) of education focused on fostering well-being, or prolonging independence in older age – though the 2009 Government Foresight study on mental well-being makes that case powerfully.

Nor does the well-meaning commitment to lifelong learning loans review their viability for people in the later stages of their careers – unlike the case for a National Learning Entitlement of the sort my colleagues Tom Schuller, Tom Wilson and I made last year*.  The understandable focus on filling the current void in provision of higher level technical education leads Augar, like Foster before him to argue for strengthening tariffs for higher level provision at the expense of the entry level courses many adults need. The report sets Foundation years in university against Access courses in HE.  Certainly there is a case for harmonisation of funding, but just as HE is offered in colleges and FE level work in universities, links across the sector surely strengthen the possibilities of progression.
On distance education Augar is coy, leaving the Office for Students to address the funding needs of distance providers, whilst recognising their importance as part of the overall offer. Nothing comparable is said about distance providers like the National Extension College in further education.

All these caveats are important to recognise. Yet Augar has done a service overall, in calling for the balance of public investment to be tilted in favour of the half of young people, and millions of adults who don’t go to HE at 18 (though that central argument was ignored by most of the press). When OECD made a similar recommendation in its report on skills in England it was met with a deafening silence. I do hope Augar gets a better hearing. It deserves it.

* Schuller, T., Tuckett, A. and Wilson, T. (2018) A National Learning Entitlement: Moving Beyond University Tuition Fees, published by the Centre for Learning and Life Chances in Knowledge Economies and Societies at: www.llakes.ac.uk http://www.llakes.ac.uk/sites/default/files/63.%20Schuller%20Tuckett%20%26%20Wilson.pdf