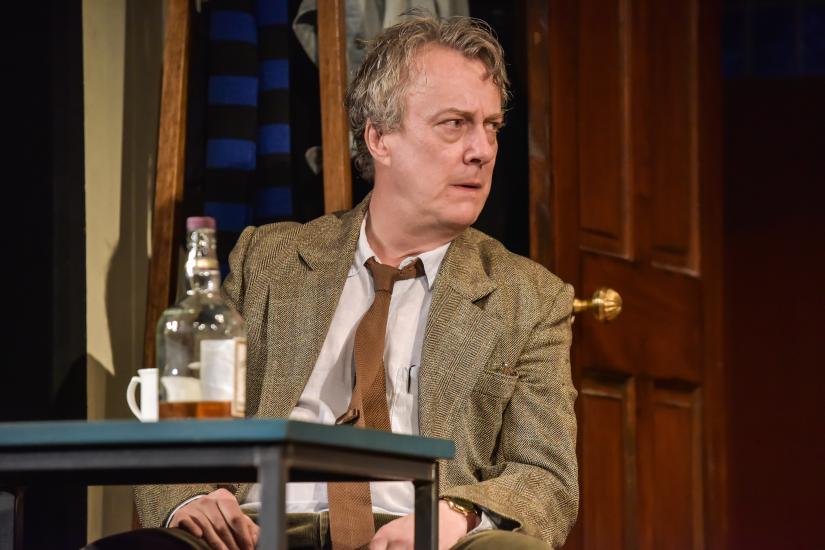 I went to see the play Educating Rita with colleagues from the NEC. Having not seen the film, I knew little about it other than the description I had read in the Cambridge Arts Theatre booklet.

To give a brief overview it tells the story of Rita, a married hairdresser, who enrols on an English Literature course at The Open University. Her tutor is Frank, a former poet and current academic who believes he performs best under the influence of alcohol. Both learn from each other and Rita especially is confronted by the different dynamics that her new education brings into her life.

It proved to be a very enjoyable and surprising watch. Enjoyable as the leads Jessica Johnson as Rita and Stephen Tompkinson as Frank put on a wonderful performance, interacting well together on stage. Surprising in that despite being set in only one room (Frank’s office), there were many different layers to the story.

At one point Rita declares that she does not fit in with “the people back home,” referring to her husband, her work colleagues at the hairdressers and the people she grew up with. This is because they do not have the hunger for learning like she does nor knowledge of classical literature that she has started to build up through her weekly tutorial with Frank. Equally, however, she insists that she does not fit in either with “the people on the grass,” referring to the other university students, as she believes she is not at their level intellectually.

Although written in 1980 these themes struck me as standing the test of time. As a recent Sociology graduate, sometimes I can’t help but to view things through the lens of sociological theory. Rita’s feelings of alienation from her friends and family as well as her sense of inferiority among her educated peers is an example of what pioneering French sociologist Bourdieu and succeeding scholars have termed ‘habitus dislocation.’ A habitus is a set of dispositions you develop from childhood which determines how comfortable you feel when put into different environments. Before learning, Rita, though hungry to learn, could relate to those in her home environment on a day to day basis. As she begins learning, however, her dispositions change meaning she is in limbo and feels like “a fish out of water” (Bourdieu & Wacquant, 1992) in both places.

As such it is an honest account which explores the sacrifices and difficulties faced by non-traditional students during their educational journey, something I can certainly relate to. On the other hand, watching Rita’s character development was an entertaining reminder of the joys that education brings. As Rita said herself, what Frank taught her gave her a ‘choice.’ She becomes able to ‘see’ things that were previously incomprehensible, challenge Frank with her new found confidence and ideas and make decisions on her own terms.

Educating Rita is currently on tour, locations and dates can be found here: https://educatingrita.co.uk/