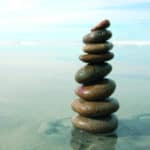 All her working life, Victoria Foster had been frustrated by not passing her maths O level when she was at school.

Victoria works full-time in London in a senior management position in childcare. The problem of her lack of achievement in maths continued to haunt her as she advanced up the career ladder. It became particularly acute when, early in 2014, the government announced that only students who had achieved a minimum grade C in GCSE maths and English would be eligible to take the new Level 3 Early Years Educator qualifications being launched later in the year.

Swimming in the sea on holiday that summer brought a moment of illumination for Victoria. As she emerged from the water, she said to herself: ‘Other people achieve a maths GCSE in their 50s. Why not me? Why not go for it?’ As a pledge that she would pull out all the stops to gain the maths qualification that had eluded her more than 30 years before, she picked up a pebble from the beach and put it in her bag.

Choosing NEC was relatively easy for Victoria once she realised there was no institution near her home in Suffolk that offered maths classes at a time when she could attend. What’s more, she knew what distance learning entailed as she had completed a degree with the Open University at the age of 42. ‘It was the quality of NEC’s course materials and the tutor support all students are offered that clinched it for me,’ explains Victoria. ‘My tutor was immensely supportive and my experience of being a student with NEC was all I hoped it would be.’

Victoria knew from the word go that all distance learners must be highly self-disciplined to achieve what they set out achieve. In her case, that meant studying while she was commuting between Suffolk and London from Monday to Friday and setting aside Sunday afternoons as well. ‘There are plenty of things I would rather have been doing, and I’m sure that’s true for everyone,’ says Victoria. ’But if it’s for a defined period of time – in my case, nine months – and that does make it seem manageable.’

Victoria’s self-discipline paid off: GCSE results day arrived. In her dressing gown, she opened the door to the postman and ripped open the registered envelope he had delivered. ‘I burst into tears of joy in front of him!’ recalls Victoria. ’36 years of regret at what I saw as my failure in maths were washed away in an instant. I had to reassure the postman that my tears were happy ones.’

What was it like being a student again after so many years in employment? ‘Going back into a large school sports hall to sit the exams was rather odd – us few adults surrounded by throngs of young people,’ says Victoria. ‘With GCSEs, there’s no escaping the fact that exams have to be sat at defined times. That’s why it’s essential you keep up with the workload. Even more structure in courses would help students with that, in my opinion.’

An unexpected bonus is that Victoria’s employer sees her maths GCSE as something she can speak from personal experience about studying to colleagues now studying it themselves.

Victoria concludes: ‘At last, I have put to rest the distress that had been with me for so many years of my failure to pass O level maths. Now, it seems ridiculous that it had become such a big thing. I didn’t need the qualification to progress in my career but I feel in a position to advise others who are looking to progress because I have achieved it myself.’

Victoria reflects gaining her GCSE Mathematics qualification later in life. A personal achievement that has also enhanced her role as a senior manager in childcare.