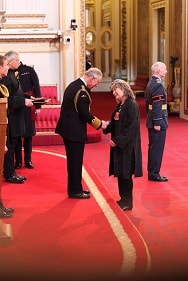 Yesterday, Prince Charles said he was pleased the valuable work of NEC has been recognised after all this time. We spoke briefly about the English historian Peter Laslett, not only a close associate of NEC’s founder Michael Young but also Prince Charles’ tutor when he was an undergraduate at Trinity College Cambridge.

In the Queen’s Birthday Honours last June, I was awarded an OBE (Officer of the Order of the British Empire) for services to further education. I was at the investiture ceremony at Buckingham Palace receiving my OBE medal.

Prince Charles gave me only one medal yesterday. If I had thousands more, here’s who I’d give them to. There would be a medal for each of the hundreds of people who have worked with NEC over the last 50 years – staff in Cambridge as well as the national network of tutors, course developers, writers, editors and designers who are part of the national NEC community. Every one of them has kept faith with the belief that you can study at home, in prison or in a submarine under the sea just as effectively as you can in a classroom. That’s not always been easy: distance learning and e-learning have their detractors.

There would be a medal for all our learners, the tens of thousands of people who have found the self-discipline to complete courses, pass exams and change their lives. Michael Young called NEC ‘the invisible college of Cambridge’. Adult learners are often invisible too. What their friends, relations and neighbours see is the person holding down a job, the carer, the parent, the partner. Learning is just one of many things NEC students find time for, often when the people they live with are asleep, at work, at school or out enjoying themselves.

When NEC’s first students enrolled in 1963, TV broadcast for only seven and a half hours a day. Colour TV was four years in the future. Now, our students talk to one another on subject forums, in the middle of the night if they like. There’s a world of a difference between distance learning in the mid-20th century and online learning in the second decade of the 21st century.

I see time and time again that the people who need the flexibility NEC offers have changed very little since those early years. Mothers who want to work outside the home, people with ambitions for a new career, prisoners determined to make good use of their time inside: these are the people who were NEC learners when we began. They are our learners all these years later.

Lottie Blunden is a single parent of four and one of a growing number of students enrolling with NEC to study STEM (Science, Technology, Engineering and Maths) subjects. Lottie started studying AS level biology with NEC in January 2014. She’s in her first year at university now, studying for a degree in midwifery. When she qualifies, she wants to work in the National Health Service. Getting to university meant starting virtually from scratch with science after a 25-year gap, at the same time as holding down waitressing, admin and cleaning jobs to support her family.

You didn’t have to do a degree to become a midwife in the 1960s. Apart from that, Lottie’s story could be the story of a woman of her grandmother’s generation, with ambitions to develop a career while her children were growing up.

Just four days ago, the Prime Minister announced an overhaul of the prison system. Since Michael Gove became Justice Secretary last summer, he has been an advocate for prison education. NEC’s work with the Prisoners’ Education Trust and St Giles Trust to help prisoners, ex-offenders and those who support them is just one of the many reasons I’m so pleased to see prison education being championed at the highest levels of government.

Although Prince Charles wouldn’t have been aware of it during his two years studying in Cambridge, just a decade earlier, Michael Young and his tutor Peter Laslett had begun to push for an expansion of higher education. They were much preoccupied with questions of social esteem and social justice at undergraduate level, arguments that are still exercising us today. Only this week, the government has suggested university admissions departments target white working class boys alongside ethnic minorities.

Very early yesterday morning, I left Cambridge in the dark for my visit to Buckingham Palace. Today, I walked into NEC’s office in Cambridge, dressed exactly as I was for my visit to London, fascinator in hand. I was greeted by colleagues – and a cake made by Christine, who works on our accounts team. I’ve already said that there aren’t enough medals for all the people I would like to give one to. There isn’t enough cake for everyone to have a slice, either. Between us, though, we have enough ambition to carry on supporting everyone who deserves a second, third or fourth chance at learning.

Above: Ros and Christine cut the cake which Christine made to celebrate Ros receiving her OBE