How do we reverse the decline in mature student numbers? Thursday, 28 September 2017 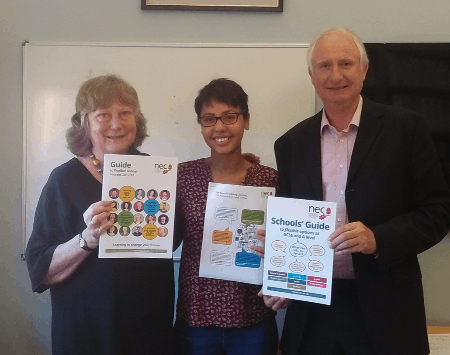 There was a 24% drop in applications from mature students, defined as those over the age of 21, to study at undergraduate level in the 2017 UCAS cycle. This is according to a House of Commons’ briefing paper published in June on higher education student numbers. This is coupled with a 56% fall in part-time participation in higher education since 2010, a trend which disproportionately affects mature students (Higher Education Statistics Agency).

At NEC, we know there is no lack of ambition to study at higher level among adults beyond the standard undergraduate age of 18 to 21. Of the thousands of students from across the UK and beyond who enrol with us, 56% state that their motivation for studying is to go on to further and higher education. So what’s going wrong?

NEC is one of the voices campaigning to reverse the decline in the number of students studying part-time. For example, we are collaborating with the Open University to remove barriers for adults who want to continue studying, formalising our joint work with a recently renewed memorandum of understanding.

Figures published in September in the Sunday Times Good University Guide 2018 show that at some universities including: the OU, Birkbeck, Wrexham Glyndŵr, London Metropolitan and Suffolk, mature students make up over half of the undergraduate intake. When compared with other higher education institutions, these universities also admit a high proportion of pupils from state schools.

Conversely, Loughborough, St Andrews, the London School of Economics, Imperial and Bath are amongst the universities taking in the lowest number of mature students. Bath, at the bottom of the list, takes in only 2.2%. As Les Ebdon, director of Fair Access to Higher Education states: “The downward trend in mature student numbers is now one of the most pressing issues in fair access to higher education…universities and colleges should look to do what they can to reverse the decline in mature student applications, as a matter of urgency.”

Why universities are missing out

As an organisation with over 50 years expertise in distance learning, NEC has countless student stories to tell that show just how much some universities are missing out on by failing to recruit mature applicants. Here are just two of them, both about students who took A levels with NEC this summer and who are now starting undergraduate courses in STEM subjects.

Robert studied A level Physics with the NEC and is studying for an engineering degree at the Open University. He is in the process of changing careers, from RAF aircraft technician to engineer in the aerospace industry.

Ellena studied A level Biology, achieving an grade A. In her mid-twenties, she has exchanged working as a receptionist at a London law firm for life as a full-time pharmacy student at Nottingham University.

The case for life-long learning

Last week, NEC presented the case for lifelong learning to Daniel Zeichner MP, who represents the university city of Cambridge. We talked to him about the barriers that currently face adult learners. One is finance. Changes to student finance in the higher education reforms of 2011 mean that students have to borrow to fund their fees, with grants being replaced by maintenance. Furthermore, loans for maintenance support for part-time study have only become available through the Student Loans Company from academic year 2017/18. A second is ELQ (Equivalent and Lower Qualification) rules preventing graduates from receiving a student loan for a second degree if they have studied earlier in life at undergraduate level. A third is disability and long-term illness. A fourth is confidence and motivation.

What we also highlighted are the many opportunities to bring about positive change. For example, the 2016 Adult Learner Survey, a Research Report commissioned by the All Party Parliamentary Group for Adult Education (APPG), found that 51% of respondents thought that hearing from others who had already completed a course would attract others to enrol themselves.

Along with other organisations encouraging adults to study beyond the age of compulsory education, at NEC we give learners a voice by publishing their stories in the media and on our social media channels. We reach out to adults through partnerships with organisations like the Prisoners’ Education Trust and the Workers’ Educational Association.

We believe that universities have a responsibility to devise imaginative approaches to attracting mature students and to devise them quickly. It is encouraging that the new Liberal Democrat leader Vince Cable has given his support to the creation of a national system of Learning Accounts, an approach to funding lifelong learning which we have always supported. What’s needed next is cross-party support in the form of a commitment to fund lifelong learning and to stand up for private candidates studying under their own team and without the support of a college or school.

The United Nations’ fourth sustainable development goal reads: ‘Ensure inclusive and equitable quality education and promote lifelong learning opportunities for all.’ The UK hasn’t achieved that goal yet but we are convinced that with continued campaigning by organisations giving adult learners a voice, commitment from across the political spectrum and creative thinking by the higher education sector, it is achievable.

Rea worked with NEC as a Marketing and Policy Intern this summer and has now returned to the University of Cambridge, where she is studying for a degree in Human, Social and Political Sciences. Look out for Rea’s next blog on her experience as an intern.