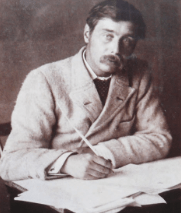 In 1893, HG Wells would publish his first book. It was not The Time Machine or War of the Worlds. It was a textbook: Text-book of Biology, published by the University Correspondence College, the predecessor to the NEC.

Wells would not become a novelist until he was 34 years old. Originally, he planned to be a teacher. His lower middle-class origins had been overcome by a scholarship to the Normal School of Science (now Imperial College London). But although he passed his Matriculation and Intermediate examinations in science, he failed his final examinations. Wells’ scholarship was discontinued, and he was seeking any work.

Meanwhile, in 1887, a young Mr William Briggs had founded the University Correspondence College here in Cambridge, and was seeking qualified tutors. Biology was becoming an important discipline, and there was demand from students who wanted to pass the open examinations at the University of London. He contacted Wells, who had passed a number of teaching examinations with the College of Preceptors (now The Chartered College of Teaching) even though he had not finished his degree. Wells began tutoring biology students by post for the UCC.

Wells had taken classes from the renowned scholar T.H. Huxley at the Normal School, and had absorbed Huxley’s theories of both pedagogy and biological evolution. He wanted a good textbook for his students, but he was known in educational circles as an outspoken critic of “cram”, where students learn facts but nothing else. The very few textbooks available were inferior — foisting them on students felt like malpractice. Perhaps Wells could create a textbook that would provide all the information needed to pass the exams, but at the same time instill an understanding of the discipline of biology?

William Briggs’ UCC venture included a publication branch, the University Tutorial Press, which produced textbooks, so Wells’ effort was encouraged. At the same time as he was studying independently for his own Bachelors examinations, and marking student papers for the UCC, and teaching biology laboratories at night at Briggs’ new University Tutorial College in London, Wells wrote and illustrated the textbook.

The book was in a small, sturdy format, designed to be carried by distant students as they went to work. The illustrations folded out from the text, so they were both protected during travel and easy to see.

The illustrations in the first edition, however, were criticised. In the second edition, the diagrams would be drawn by Amy Catherine Robbins, originally Wells’ student at the laboratories in London and later his wife.

Wells’ introduction made it clear that students were receiving not just information, but a method that should teach them biology while making “cram” impossible: The method worked, because Wells had a unique understanding of what it was like to study privately. His mother had been a maid-turned housekeeper, and his father a cricketer-turned-shopowner. His mother had planned for him to be a shop clerk, and he’d had to fight for education at an early age. The examination system in the grammar schools had worked in his favour, and he had learned subjects independently in his childhood to pass exams. Now he was able to help others do the same, but with a proper guide.

H.G. Wells’ challenge is pertinent today, as we negotiate the various ways to assist students in passing examinations while working to achieve deep knowledge in the subject. From his own experience, Wells knew that independent study has the potential to be isolating, and he used the media of his day to bridge that gap. Assisting far-flung students in navigating course materials and theories to achieve their goals continues to be at the heart of distance education.

I am Lisa M. Lane, and I’m happy to be writing as a guest blogger. My historical research includes the organisation that was the precursor to the NEC, the University Correspondence College. I teach history, both in the classroom and via distance education (since 1998) at MiraCosta College in Oceanside, California. I often write about online pedagogical methodology, but as a historian I love doing research, and am working on a book about HG Wells and distance education.