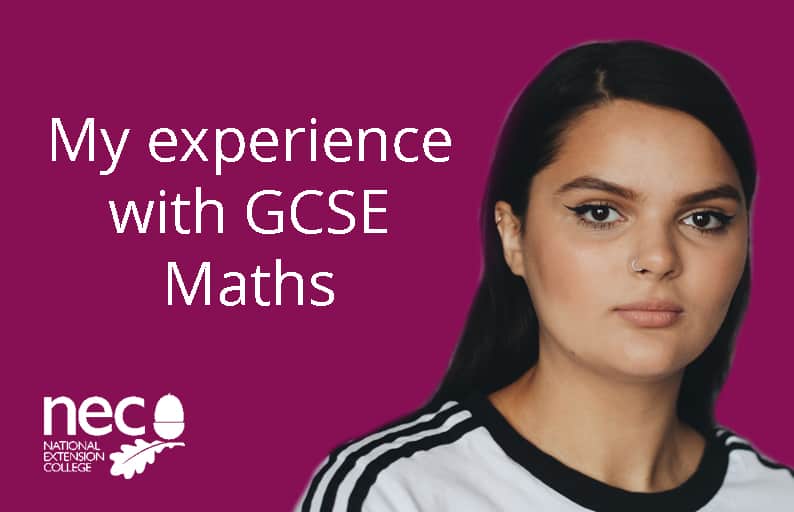 In Year 8 I was hospitalised with Crohn’s Disease along with my twin sister. This put my education on hold. I did get a small amount of work sent home while recovering, but this was not enough to help me. Maths has always been a particular struggle for me – for some reason I just couldn’t wrap my head around it. When I was recovering from Crohn’s I was even more behind and much more anxious about it.

In Year 11 I left school to be homeschooled full time. School wasn’t really working because of Crohn’s disease and I was so far behind, I just didn’t know where to start. I didn’t use distance learning at the time and relied solely on Maths books. I finished school with an E in Maths. Of course I wasn’t happy with the grade. However, at this time, I was still struggling with Crohn’s (especially fatigue) and still hadn’t dealt with my anxiety and depression.

In college I began a BTEC Creative Media course whilst doing Functional Maths and English. At this point I had no idea what I wanted to study at university, I just knew I needed to pass Maths! My previous perception of Maths was very much still there and it made the situation harder. Meanwhile, Crohn’s had settled down, but I was still struggling with the mental health side of things. Again… I failed Maths with one mark off of a pass.

Two years later when I plucked up the courage to face Maths again and hopefully pass, I applied for a grant from Crohn’s & Colitis UK to study with the National Extension College (NEC) – kindly they agreed to help fund the courses. I was in a much better head space and I was handling the disease much better. This time round I had even more determination to pass Maths. I wanted to approach it in a different way, I didn’t want to tell myself that I couldn’t do it. I realised that this way of approaching Maths was counterproductive. I had to have a positive attitude and needed to enjoy what I was doing to do well.

Studying with NEC allowed me to use my time how I wanted without being restricted by a timetable. I could make mistakes in Maths in my own time and figure out a way of learning the content in my way, there was no pressure. Slowly Maths became comfortable and, dare I say, enjoyable.

I let myself make mistakes and learn from them rather than worrying about failure. The knowledge I gained through my other NEC course, GCSE Psychology, allowed me to see Maths from a new angle; I saw a reason for learning Maths and how important it is! I am pleased to say that my new approach and the help from NEC has paid off as I passed this time round. It has taught me so much more than school could have done.