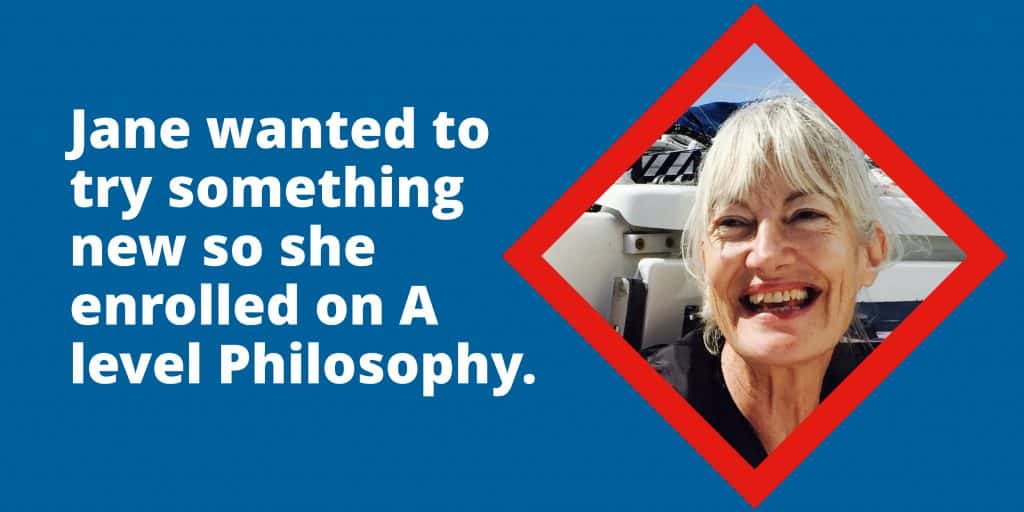 Throughout NEC’s history, many retired people have chosen to spend some of their new-found leisure time studying a subject that they’ve always been passionate about. This was the case for Jane.

Jane wasn’t new to distance learning having used short online courses in her attempt to learn Korean, inspired by her Korean daughter-in-law. However, enrolling with NEC was her introduction to the world of pursuing A level qualifications online.

“I searched the internet for A level Philosophy and NEC was one of the sites that came up. I found it clear and easy to read and the course seemed to be what I wanted.”

As many people do each year, Jane was looking for a new challenge in January 2021 and decided that philosophy would be the topic for her. She considered taking up bread-making as a new hobby but instead went with something a little more time-consuming due to the pandemic restrictions in place at the time.

Philosophy has long been a subject that Jane was interested in but, as often happens, life got in the way:

“When I left school I was planning to go to Lancaster university to do Russian and Philosophy, and I decided not to go, because I was in love (may not have been the best decision of my life – it didn’t last) and by the time I did decide to go to university, three years later I opted for French with additional Italian, as being perhaps easier to get a place, since I had good grades in French and had never done philosophy or Russian), so – in January [2021] I thought it was finally time to explore the road I didn’t travel. It’s not the first time I’ve thought of this – I have looked at OU courses a couple of times, and indeed I did this time, but the course I found was psychology and philosophy, and I didn’t want to do that as I have already done an amount of psychology stuff, predominantly NLP (neuroscience-linguistic programming). Also a degree would take years, so an A level suddenly seemed like an attractive proposition.”

When selecting an aspect of her NEC experience that particularly benefited her learning, Jane highlighted the flexibility that our courses provide, allowing her to study in her own time and at her own pace. She was so keen to learn more that she would wake up early to ensure that she could fit in study before the rest of her hobbies:

“I have been able to fit it around the other parts of my (pretty full) life. Sometimes I get up early to do it for days in a row, sometimes I neglect it for days, it depends what’s going on. I couldn’t have done it without that.”

Jane has toyed with the idea of continuing her philosophy studies to degree level and is considering another A level for general interest: